The latest on the coronavirus pandemic for March 19

The latest on the coronavirus pandemic for March 19

Across Ontario, there’s growing consensus among medical experts that the province has entered a third wave of COVID-19 cases.

There’s also growing concern that anecdotal evidence of recent serious infections skewing toward younger adults is a harbinger of a difficult stretch to come — one that may upend persistent notions of COVID-19 typically only being a grave illness for the elderly.

“We’re at a real risk right now of the variants of concern taking off, and that prime age group of 40 to 75 being hit really hard by this wave, particularly with the variants being more likely to cause serious illness that requires more hospitalization,” said Dr. Brooks Fallis, a critical care physician in Peel region, west of Toronto.

Emergency physician Dr. Kashif Pirzada said his colleagues in the Greater Toronto Area are already seeing an impact, with younger patients arriving in hospital even more ill than during previous waves.

“I myself saw a few patients in their 30s and 40s who had significant illness,” he said. “One person had severe lung damage that you see in COVID, and they were young, healthy, no medical problems.”

Clinicians and epidemiologists suspect multiple factors could shift the trajectory of the pandemic in Ontario.

On one hand, vaccinations are slowly making an impact for certain populations, including front-line health-care workers and the elderly — with the death toll in long-term care dropping dramatically as vaccination rates have picked up.

But there are still hospitalizations and deaths happening among other groups, with younger adults remaining vulnerable, said Dr. Kali Barrett, a critical care physician at Toronto’s University Health Network and a member of the COVID-19 Modelling Collaborative, a group of scientists and clinicians affiliated with Toronto’s university and hospital system.

“Our vaccination efforts to date have done nothing to protect the at-risk, community-dwelling adults,” she said.

Against that backdrop, there’s a patchwork of restrictions and reopenings across the province, giving people more chances to mingle and spread the virus, whether that’s in a shopping mall or a spin class.

Meanwhile, the province has announced that Ontarians aged 75 and older can start scheduling COVID-19 vaccine appointments through the province’s booking portal on Monday, and pharmacies will begin offering the AstraZeneca-Oxford vaccine to residents 60 and above.

Adults 75 and older were set to become eligible by the first week of April, but the province is moving ahead because more than half of residents 80 and older have now gotten at least one dose of a vaccine, Premier Doug Ford said on Friday. 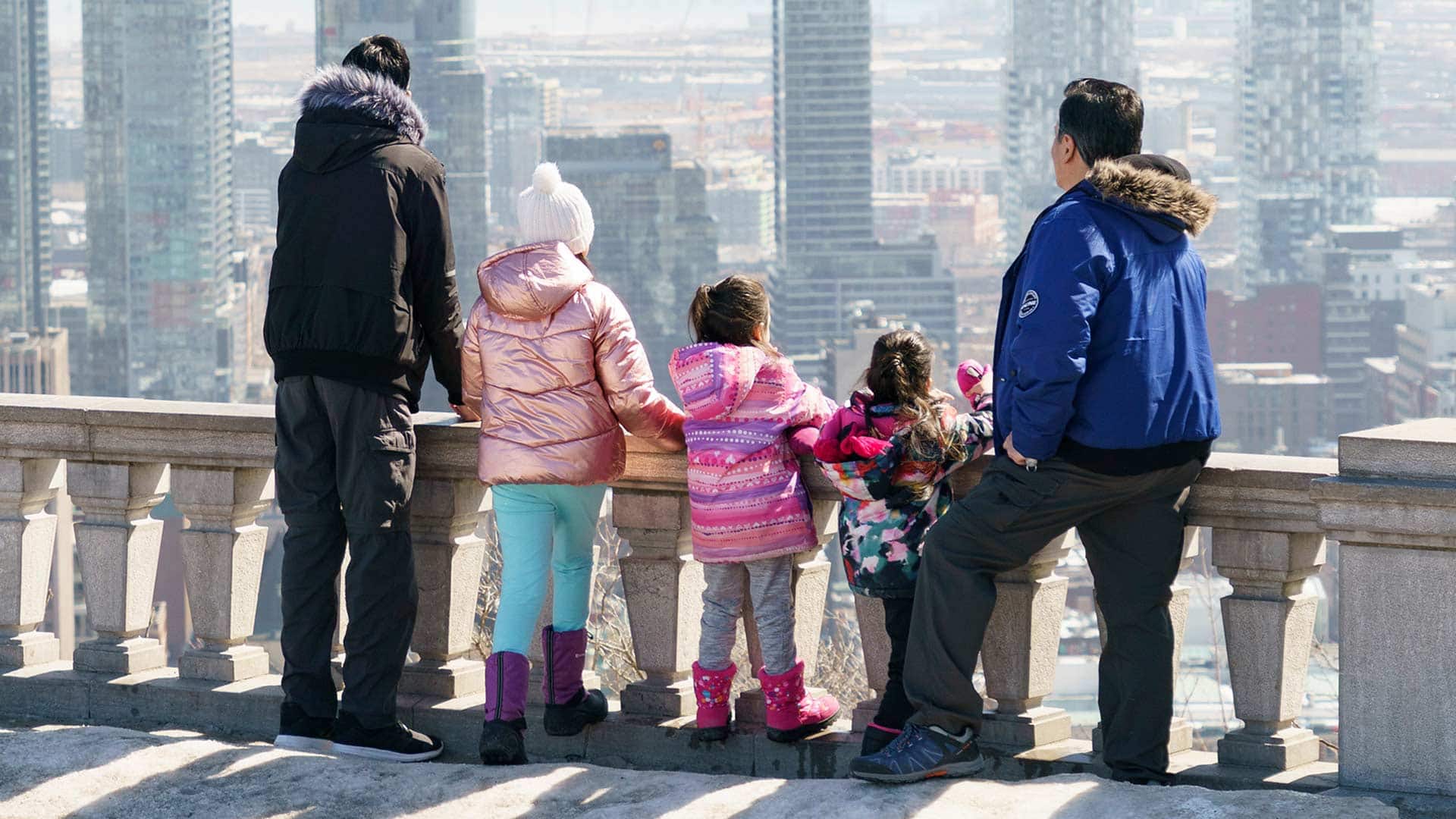 Quebec health officials are launching an aggressive vaccination blitz in two Montreal hot spots focused on the parents of young children because of COVID-19 variants. The plan frustrates some teachers and daycare staff who think they should be included. 2:01

Front-line workers in B.C., including teachers and grocery store staff, to begin receiving vaccines in April

More than 300,000 front-line workers in B.C., such as teachers, child-care workers, grocery store staff and first responders, will be eligible for a COVID-19 vaccine next month as the province moves ahead with its vaccination plan.

The Ministry of Health said people in priority groups will receive their first dose of the AstraZeneca-Oxford vaccine in April. See the list of eligible groups here.

Health Minister Adrian Dix said the age-based rollout is ahead of schedule and that progress, combined with the incoming supply of AstraZeneca vaccines, means the province can move to vaccinate those working in specific front-line industries.

The province said it expects to receive about 340,000 doses of the AstraZeneca vaccine by the end of May and it plans to use a combination of community pharmacists, existing clinics and mobile clinics at some worksites to administer the vaccine to the workers.

“We know this has been an extremely challenging time for front-line workers … they have gone to work day after day, day after day. They are the true heroes we want to immunize at this time,” said Premier John Horgan.

Canadian Armed Forces personnel are being sent to help with COVID-19 vaccinations on up to 23 northern Manitoba First Nations that are otherwise hard to reach, Prime Minister Justin Trudeau says.

“This is about working in partnership with First Nations on their efforts to get as many people vaccinated as soon as possible,” Trudeau said at a news conference on Friday morning.

The federal government approved the deployment on Thursday, he said. The military is now working on detailed plans ahead of its arrival in the communities. Trudeau didn’t specify which communities personnel will be sent to.

Earlier this month, health officials announced immunization teams were set to start visiting First Nations in Manitoba to vaccinate entire communities at once.

Areas at highest risk of flooding, fires or losing winter road access were slated to be prioritized.

Read more on the situation in Manitoba

As COVID-19 vaccination appointments book up five days in advance in some parts of Ontario, many people are surprised to learn that an estimated one-third of long-term care workers — who have been eligible since December — have not yet gotten their shots. This compares to over 95 per cent of long-term care residents who have received at least one dose.

It’s not clear how many of those workers haven’t been vaccinated due to logistical issues, such as not being able to get into a COVID immunization clinic, versus how many are reluctant to get the shot at all. Just like in the broader Canadian population, vaccine hesitancy exists among long-term care workers — and experts say the reasons are varied and complex.

They range from confusing public health messaging about vaccines that are brand new, to a lack of access to someone who can address their concerns and questions without judgment, to economic factors, experts said.

The fact that many long-term care workers don’t get paid sick time is the “number one reason” some haven’t yet been vaccinated, said Sharleen Stewart, president of SEIU Healthcare, a union representing staff in many of Ontario’s long-term care homes.

“These very low-wage earners, predominantly women … they cannot afford to lose, you know, $200, $300 a paycheque by having to stay home for a couple of days to rest after their vaccination” if they experience side effects, Stewart said.

And it’s a diverse profession, where cultural factors can shape attitudes about vaccines — as well as racially based mistreatment by the health-care system that fosters fear or distrust, said John Yip, CEO of Kensington Health, a not-for-profit organization in downtown Toronto that includes a 350-bed long-term care home.

Kensington Health started a “champion” program, in which staff from different racial or cultural groups who have had the vaccine informally talk to co-workers — often in their own language — to listen to their concerns and help reassure them that the vaccine is safe.

Read more on what is being done to combat vaccine hesitancy

The scientist who won the race to deliver the first widely used coronavirus vaccine says people can rest assured the shots are safe, and that the technology behind it will soon be used to fight another global scourge — cancer.

Ozlem Tureci, who founded the German company BioNTech with her husband, Ugur Sahin, was working on a way to harness the body’s immune system to tackle tumours when they learned last year of an unknown virus infecting people in China. Over breakfast, the couple decided to apply the technology they’d been researching for two decades to the new threat.

Britain authorized BioNTech’s mRNA vaccine for use in December, followed a week later by the United States. Dozens of other countries, including Canada, have followed suit and tens of millions of people worldwide have since received the shot developed together with U.S. pharmaceutical giant Pfizer.

As BioNTech’s profile has grown during the pandemic, so has its value, adding much-needed funds the company will be able to use to pursue its original goal of developing a new tool against cancer.

The vaccine made by BioNTech-Pfizer and U.S. rival Moderna uses messenger RNA, or mRNA, to carry instructions into the human body for making proteins that prime it to attack a specific virus. The same principle can be applied to get the immune system to take on tumours.

“We have several different cancer vaccines based on mRNA,” said Tureci.

Asked when such a therapy might be available, Tureci said “that’s very difficult to predict in innovative development. But we expect that within only a couple of years, we will also have our vaccines [against] cancer at a place where we can offer them to people.”

During a scare in Europe this week over the coronavirus shot made by British-Swedish rival AstraZeneca, Tureci dismissed the idea that any corners were cut by those racing to develop a vaccine.

“There is a very rigid process in place and the process does not stop after a vaccine has been approved,” she said. “It is, in fact, continuing now all around the world, where regulators have used reporting systems to screen and to assess any observations made with our or other vaccines.”

On Thursday, the four East Coast provinces announced a conditional return of the Atlantic bubble on April 19, permitting travel between Newfoundland and Labrador, Nova Scotia, New Brunswick and Prince Edward Island without quarantine.

In an 18-page interim report, also released Thursday, the premier’s advisory council on tourism recommended Newfoundland and Labrador open to all Canadians — not just those in the Atlantic region — by July 1, given projected vaccination timelines.

Kathie Hicks could scarcely hide her excitement at the news.

“Let’s just say it’s the first bit of sunshine we’ve heard in a while,” Hicks, who runs the entertainment company Spirit of Newfoundland in St. John’s, said with a laugh. “Let’s go.”

Hicks argued in favour of the report, saying that a triple threat of vaccination rates, point-of-entry testing and operational safety precautions would leave little justification for keeping borders closed.

Reopening for tourists, she suggested, would also electrify related — and equally suffering — industries, creating an economic domino effect. Airline traffic would pick up, she projected, and the influx of activity might also get locals moving and spending.

“We’re not saying go internationally and open it all up,” she said, but she does want Canadians from any province — a demographic that makes up about 80 per cent of tourism activity, according to 2016 provincial government data — to be allowed to visit.

Find out more about COVID-19

For full coverage of how your province or territory is responding to COVID-19, visit your local CBC News site.

To get this newsletter daily as an email, subscribe here.

See the answers to COVID-19 questions asked by CBC viewers and readers.

Still looking for more information on the pandemic? Reach out to us at covid@cbc.ca if you have any questions.