‘Crucial moment’ for Canada in battle between vaccines and variants, Tam says

‘Crucial moment’ for Canada in battle between vaccines and variants, Tam says

Canada’s top doctor said there’s concern that an increase in more transmissible variants of the COVID-19 virus may be threatening the country’s progress in containing the spread of infections.

In an update published Thursday night, federal health officials reported a total of 4,499 variant of concern cases, including:

While Canada’s vaccine rollout has been gaining speed over the past few weeks, Dr. Theresa Tam said  Friday that the country is in a “crucial moment” in the battle between vaccines and variants.

“If we don’t slow down the spread of the variants, team vaccine is at risk of falling behind,” Tam said at a news conference.

“But if we can hold on and give it that last push, by keeping up with personal protective measures and limiting our contacts to the extent possible, we will clear the path for team vaccine to cross the finish line.” Meanwhile, Ontario is loosening restrictions on restaurants, allowing outdoor dining in Toronto and Peel Region while increasing restaurant capacity for other regions.

The province said Toronto and Peel will remain in the strictest “grey lockdown” category of Ontario’s pandemic framework but restaurants can offer services outdoors, as requested by the region’s top doctors.

Restaurants in regions in the second-strictest “red” category will be able to increase capacity to a maximum of 50 people indoors, up from the previous limit of 10.

Restaurants operating in “orange” zones will be able to have 100 people indoors, from a previous limit of 50.

Earlier, Premier Doug Ford offered an update on the province’s vaccine rollout, saying that as of Monday, people aged 75 and older can start scheduling appointments through the province’s booking portal. 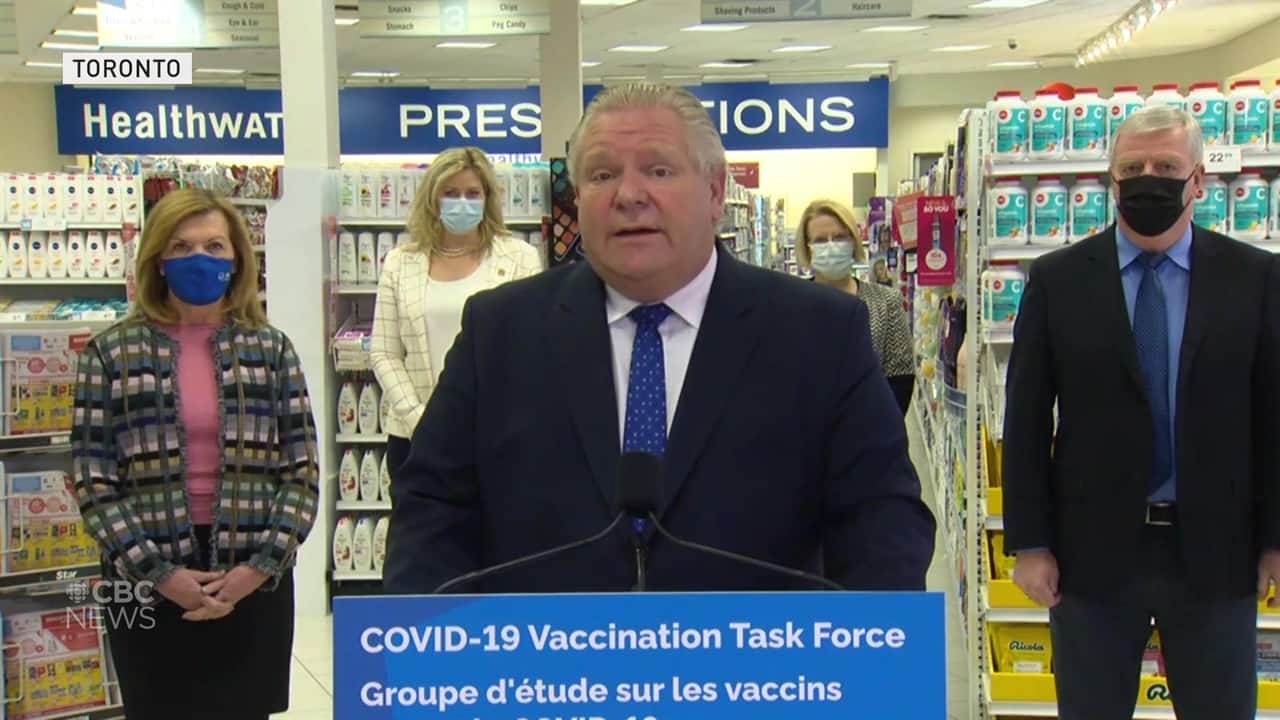 Ontario Premier Doug Ford says vaccinations of those 80 years and older are ahead of schedule, so 75-year-olds will be able to book appointments for the COVID-19 vaccine on Monday. Inoculations in pharmacies are also expanding. 1:36

Nova Scotia announced that New Brunswickers coming into the province will no longer have to self-isolate after entering. The change will take effect at 8 a.m. AT on Saturday; the province also reported three new cases of COVID-19 on Friday.

Nova Scotians going to New Brunswick — which reported two new cases on Friday — will still have to self-isolate for two weeks upon arrival, and it remains unclear if New Brunswick plans to lift its border restrictions for Nova Scotians.

In Quebec, health officials reported 764 new cases of COVID-19 on Friday and 11 additional deaths. Hospitalizations in the province stood at 504, with 99 in intensive care.

The update comes after the province announced it is allowing everyone 65 and older in Quebec to sign up for a first dose of the COVID-19 vaccine. Late Thursday, the province’s appointment portal opened up vaccinations in all 15 health regions, after opening it to Montrealers in that age bracket one week ago and to Abitibi-Temiscamingue and Côte-Nord residents earlier this week.

The Quebec government intends to vaccinate five million people with a first dose of a COVID-19 vaccine in the next 100 days.

Prime Minister Justin Trudeau, meanwhile, said on Friday that the Canadian Armed Forces are working on the details of a plan to assist remote First Nations communities in northern Manitoba with vaccination efforts.The province reported 93 new COVID-19 cases and one related death on Friday.

Health officials in Nunavut announced that the territory now has enough doses of the Moderna COVID-19 vaccine to inoculate its promised 75 per cent of the adult population.

Friday also marked a five-day stretch with no new cases of COVID-19 announced for the territory.

WATCH | Why it’s important to have a ‘COVID safety plan’ — even after getting a dose of vaccine: B.C.’s provincial health officer says those who get vaccinated against COVID-19 must still maintain physical distance and wear masks. 0:59

What’s happening around the world

As of Friday evening, more than 122 million cases of COVID-19 had been reported worldwide, according to a tracking tool maintained by Johns Hopkins University. The global death toll stood at well over 2.6 million. Big-city mayors in countries with emerging economies say they need more COVID-19 vaccines so that tourists will see their cities as safe places to visit. 1:18

The World Health Organization’s vaccine safety panel said on Friday that data from AstraZeneca-Oxford’s COVID-19 shot does not point to any overall increase in clotting conditions but that it would continue to monitor effects.

“The AstraZeneca COVID-19 vaccine [including Covishield] continues to have a positive benefit-risk profile, with tremendous potential to prevent infections and reduce deaths across the world,” the WHO’s global advisory committee on vaccine safety said in a statement, issued after its independent experts met on Tuesday and Thursday to review data.

In the Asia-Pacific region, the Philippines recorded 7,103 new coronavirus cases on Friday, a record daily increase in infections, as authorities tightened coronavirus curbs in the capital and approved Russia’s Sputnik V COVID-19 vaccine for emergency use. The previous record was 6,958 cases on Aug. 10.

A new wave of cases in the Philippines, which has the second-highest number of COVID-19 infections and deaths in Southeast Asia, is threatening hopes of a strong economic rebound after a record contraction last year and the loss of millions of jobs.

The Health Ministry said there were now 648,066 confirmed coronavirus cases and 12,900 deaths, including 13 more fatalities on Friday.

“The ministry continues to appeal for us to stay home and avoid going out if not necessary,” it said. 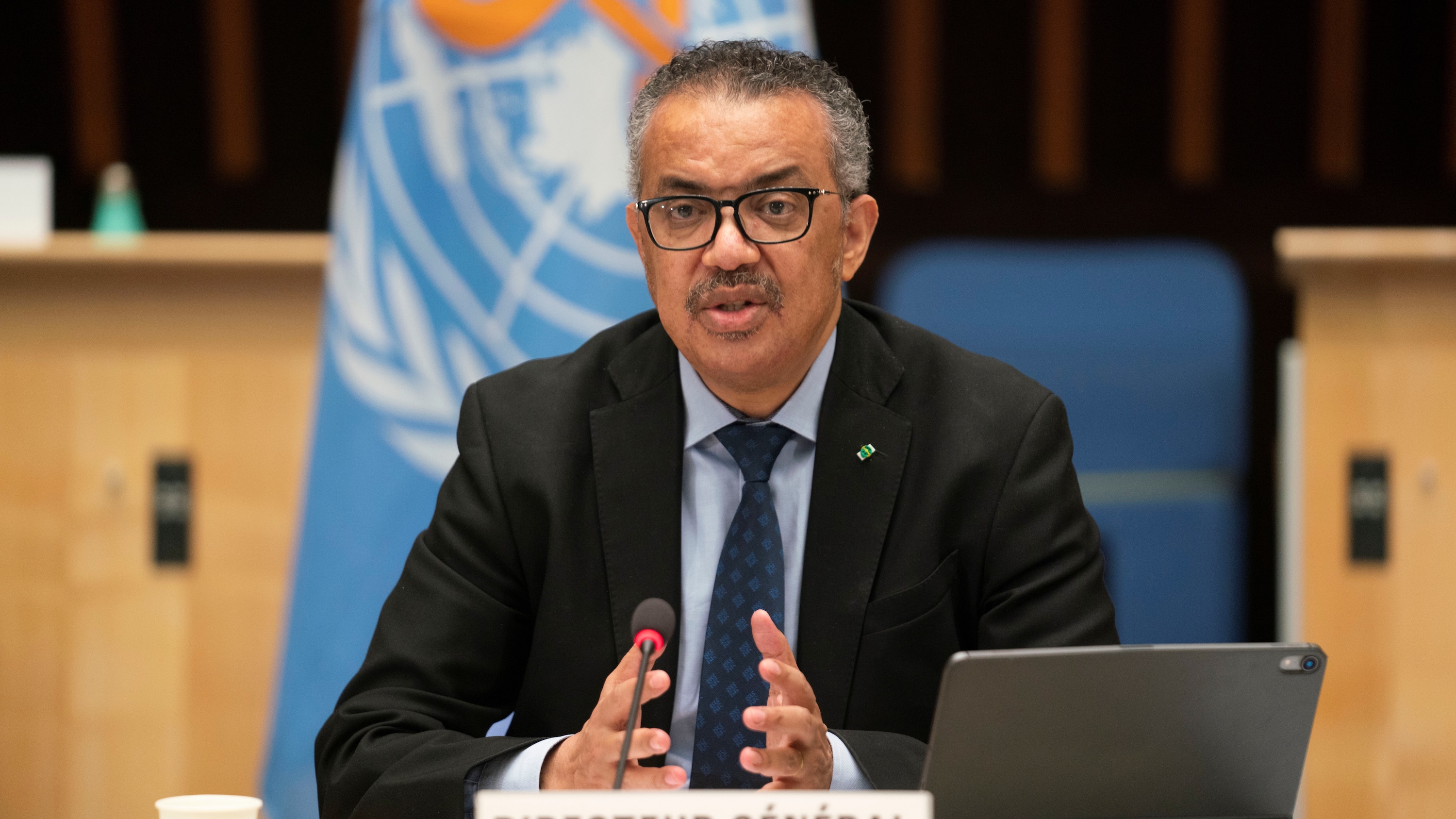 The latest outbreak is again concentrated in the congested Manila region and includes the more transmissible variants.

The coronavirus task force on Friday reduced the number allowed at religious gatherings and conferences to 30 per cent of capacity from the previous 50 per cent until April 4. It also ordered cinemas, driving schools, libraries, museums and cockfighting arenas to close.

The Philippines’ Food and Drug Administration (FDA) on Friday approved the Sputnik V vaccine developed by Russia’s Gamaleya Institute. It is the fourth to get emergency use authorization after Pfizer, AstraZeneca and Sinovac.

U.S. vaccine-makers Moderna and Johnson & Johnson have made inquiries about the documents needed for emergency-use approval but have yet to file applications, Domingo said.

The Philippines launched its inoculation drive on March 1 and has received delivery of 1.125 million donated doses of the Sinovac and AstraZeneca vaccines. The government plans to roll out 140.5 million shots by December, to inoculate 70 million adults in a bid to achieve herd immunity.

Australian Prime Minister Scott Morrison says he is working with U.S., Indian and Japanese partners to provide emergency coronavirus vaccine to Papua New Guinea. Australia has provided 8,000 AstraZeneca doses from its own stockpile to its nearest neighbour after an explosion of infections in the South Pacific island nation in recent weeks.

In Africa, the ability to produce COVID-19 vaccines got a boost Thursday with the announcement that Biovac has signed a full manufacturing partnership with U.S.-based ImmunityBio.

Biovac is a laboratory partly owned by the South African state. It has an agreement with ImmunityBio, which has a COVID-19 vaccine in clinical trials, to produce the vaccine sometime next year. Biovac, based in Cape Town, has the capacity to produce between 20 million and 30 million vaccines in a year.

South Africa’s Aspen Pharmacare is awaiting approval to assemble the Johnson & Johnson vaccine, a process of blending the ingredients sent in large batches and putting the vaccine into vials — the filling and finishing. Aspen said it has the capacity to produce 300 million doses annually of the J&J vaccine.

Tanzania’s new president, Samia Suluhu Hassan, said the country should unite and avoid pointing fingers after the death of her predecessor, John Magufuli, a COVID-19 skeptic.

In Europe, French Prime Minister Jean Castex has announced new restrictions to combat the resurgent coronavirus epidemic in Paris, where gravely ill patients are filling ICUs. Hospital workers are hoping the measures will help relieve the pressure, but some say they don’t go far enough.

Castex announced a mishmash of measures, including closures of nonessential shops, that are mostly limited to Paris and northern France and don’t oblige people to spend most of the day indoors. They take effect on Friday night. Meanwhile, a countrywide nightly curfew is being shortened slightly.

Authorities in the Bosnian capital of Sarajevo have implemented lockdown measures to counter soaring coronavirus infections.

The Sarajevo government said a nighttime curfew will start on Friday, from 9 p.m. until 5 a.m. All bars and restaurants will shut down starting Saturday, except for food deliveries. Authorities say the measures are necessary because of a “drastically worsened” epidemiological situation in the city.

With infection and death rates remaining at high levels, the Czech government has extended the country’s tight lockdown until after Easter. Health Minister Jan Blatny says his country is still not in a position to relax the measures.

In the Americas, Mexico’s president thanked U.S. President Joe Biden for agreeing to provide 2.7 million vaccines to help offset a shortfall in its inoculation drive.

The beaches of Brazilian city Rio de Janeiro will be closed this weekend, as the local government seeks to stem the spread of the virus.

In the Middle East, Syria will take delivery within weeks of its first COVID-19 vaccines from the global vaccine-sharing platform COVAX, allowing it to kick off an inoculation program as early as next month.