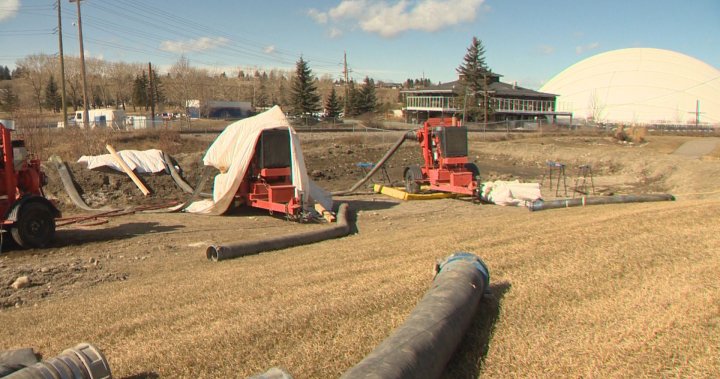 Fox Hollow has a reputation of being the first course open and the last to close each golf season, but a significant sewer issue underneath the course has hampered their ability to open.

Back in January, course officials discovered a sewage line had ruptured and began to leak in near the first tee as well as near the 18th hole.

Fox Hollow was originally told that the project to repair the leaks would take between two and three weeks, but equipment remains on site.

According to Griffith, work has recently slowed down as more equipment arrived on site last week to begin digging in the parking lot.

Golfers aren’t going to be allowed onto the course as Griffith said it’s still not safe with the sewer bypass lines running along the pathways to the clubhouse.

“All the equipment, all the pumps, and the dirt they’ve got piled around our paths doesn’t make it feasible to get people on the golf course in a safe manner,” Griffith said.

Fox Hollow’s concerns come as Calgary is hit with what appears to be an early spring, with some record-setting temperatures to end the last weeks of winter.

There is talk of golf season starting in the city as soon as next week.

“Not being allowed to be open here since December with the golf dome because of restrictions and shutdowns, it would’ve been nice to get some people rolling through here,” Griffith said.

In a statement to Global News, the City of Calgary said it is working hard to resolve the wastewater pipe break at Fox Hollow, but it may be another month before that work is finished.

“We understand that Fox Hollow is eager to open, and we are working to provide access to the majority of the course while we finish up the repair,” City of Calgary project manager Charles Pullan said. “We anticipate that all the work should be completed in 3-4 weeks.”

Griffith said he is hopeful that the course and city officials can find a workaround to allow golfers on the course as work is underway.